Aboriginal history has gone through various phases. In the postwar period it started with published biographies of notable Aboriginal persons, such as Douglas Lockwood’s I, The Aboriginal, a biography of Phillip Roberts of Ngukurr. The next stage of the liberation of Aboriginal history began with Henry Reynolds, who revealed the violent underbelly of European ‘settlement’ in the 19th century. Recently, Aboriginal scholars have started writing their own history. This excellent book’s claim to be the first Aboriginal history of South Australia is an affirmation of that latest phase in Aboriginal history. 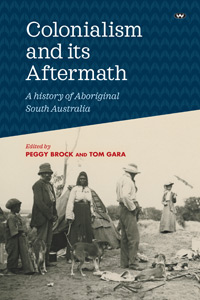 South Australia has already had the Reynolds-like story told, as in Foster, Hosking and Nettelbeck’s Fatal Collisions (2001) and Foster and Nettelbeck’s Out of the Silence (2012). Brock and Gara’s book is a culmination of a process. The book’s prevailing message is one of mutual incomprehension between black and white in South Australia. That message permeates all the chapters in the book, without compromising the originality of any of them. That is because most chapters include local nuances and differences in the prevailing story of dispossession and loss.

This book is essentially a relatively comprehensive set of local histories that in total – and the editors, Brock and Gara, are to be commended for this result – credibly sum together to make a history of Aboriginal people in the whole state. Each of the chapters is accompanied by the ‘life story’ of some person who illustrates or exemplifies the points made in that chapter. Some of these stories are less convincing or emblematic than others, but it is an interesting innovation: a gesture of respect. Some of the chapters summarise earlier specialist local histories, such as Peggy Brock’s Yura and Udnyu: A History of the Adnyamathanha of the North Flinders Ranges (1985). The book is also very well referenced, which will prove handy for future researchers.

The chapters are organised into four parts: the first part (with three chapters) provides a broader context to the following 13 local histories. These latter are organised regionally – Adelaide, southern South Australia, and the Outback (the latter term, paradoxically, a settler construct).

In Part 1, Chapter 1, Monaghan outlines the Aboriginal groups present in SA at the advent of settlement. He claims that there were three cultural groupings there at that time, which differs from the ‘official’ AIATSIS interpretation. Then Foster and Nettelbeck (‘Protectorate to protection’) describe the evolution of colonial policy towards SA’s Indigenous people. They argue that SA was singular in that it had an earlier and more sustained emphasis on rations for ‘destitute’ people than did other states. The final chapter of Part 1, by Brock and Gara (‘Segregation to self-determination’) is perhaps the most interesting, as the authors depict the interplay between social Darwinist, eugenicist and ‘half-caste’ assimilations over time.

Part 2 focuses on the Adelaide region. The first chapter (‘Early encounters on the Adelaide plains …’) by Lockwood describes pre-conquest encounters between whalers and sealers and Aboriginal people. This very good piece adds a local nuance in describing how the pressures of European settlers on resources led to increased inter-group conflict and the intensification of sorcery and revenge killings. The next chapter by Gara (‘The Aboriginal presence …’) covers the century from the 1860s and provides a good and occasionally amusing description of Aboriginal agency via fringe camps in the 19th century. Gara provides a corrective to other histories that ignore the continuous residence of Aboriginal people in Adelaide.

Chapter 6 by Kerin describes activism in Aboriginal causes. This starts with respectable European radicals and evolves towards more recent Aboriginal-owned and controlled activism. Bell’s study of the Ngarrindjeri of the Lower Murray and Coorong area also illustrates pre-settlement relations between Aborigines and whalers and sealers. Here is another local nuance: the Ngarrindjeri apparently participated actively in this industry. Bell also describes how the Ngarrindjeri altered marriage customs to ensure their survival.

Krichauff summarises her earlier book Nharangga Wargunni Bugi-Buggillu (2011) to provide a Narungga history of the Yorke Peninsula. Again we see early contacts with whalers and sealers. Here the depredations of the later settler invaders could to some degree be endured because the heavily wooded nature of most of the peninsula afforded the Narungga people with refugia in which they could sustain their society and (to some degree) their traditional mode of production. The Narungga also supported the creation of the Point Pearce mission. Indeed, some of the authors of these chapters are much more sympathetic to missionaries than is usual in Aboriginal histories. 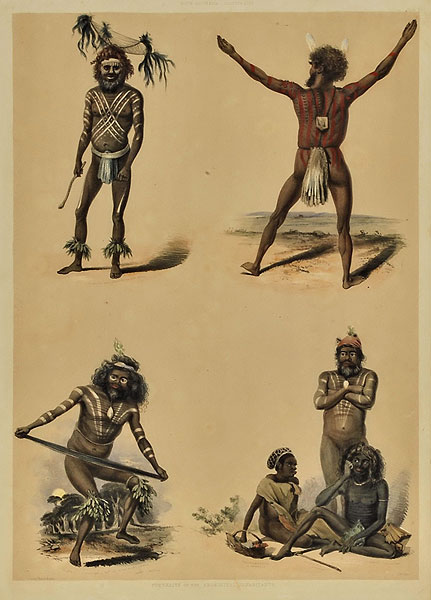 Foster provides Chapter 9 on ‘The lower South East of South Australia’. He notes the disastrous irruption of smallpox in the 1830s. Again, there is an interesting local nuance here: the gold rushes of the 1850s caused such a shortage of agricultural labour that local Aborigines could get jobs and created what we now know (see Jon Altman) as a ‘hybrid’ economy. This happy situation did not last. Our editors, Gara and Brock, add a chapter on what is the most problematically defined region (Chapter 10, ‘Eyre Peninsula and West Coast’). Here the European penetration of Aboriginal country was facilitated by the number of good harbours. Yet resistance was fierce, particularly from the Nauo and Barnigaria, because sealers living on Kangaroo Island used to raid their country to secure women. In this region, as in many others in SA, the pastoralists were followed by the missionaries and eventually by ration stations. The best feature of this chapter is the use of particular Aboriginal families’ history to demonstrate the general argument.

Part 4, ‘The Outback’, with seven chapters, is the largest section of the book. Brock starts with a chapter on the North Flinders Ranges. Here the Adnyamathanha (or ‘Yura’) survived because the ranges provided refugia. Brock makes the interesting point that the Yura adapted to the Europeans better than most groups for two reasons: their famous ochre pits gave them skills in dealing with strangers and they had a maternal moiety system, which could integrate children born of non-Aboriginal parents. In Chapter 12, Nobbs provides a history of the North East in the decades of the 1840s to the 1860s. Here there appeared to be an active alliance – not just the usual ‘blind eye’ – between pastoralists and police. This area has attracted a lot of linguists and ethnographers, meaning that we know more about the Dieri than we do about most Aboriginal groups.

An interesting difference emerges in Lucas and Fergie’s chapter (Chapter 13, ‘Transfiguring Aboriginal relations in the far North East’) in that here the primary agents of the European irruption were not the pastoralists but surveyors. This chapter tells a familiar tale: the Aboriginal economy ruined by the pastoralists’ seizure of the water resources and consequent Aboriginal adaptation – as drovers, doggers, kangaroo shooters and fencers – on the margins of the pastoral economy. Postwar, as mechanisation meant stations used less labour, the local Aborigines migrated to the fringes of towns such as Marree. This is a thoughtful and elegant chapter.

MacFarlane (in Chapter 14, ‘Inside the Far North’) provides a synoptic chapter that begins with the construction in the early 1870s of the Overland Telegraph Line. It has a familiar story line: massacres in the 1880s and the changes wrought by cattle stations. The introduction of mining provides the main local difference to the rest of the SA.

The history of the Anangu in the north west of SA is initially one that features official protection (Chapter 15: Pybus, ‘North West South Australia’). In 1921, the area was declared a reserve ‘for the protection of the natives’ (or to avoid giving them rations?) Doggers had already penetrated the region and there had been extensive eastward movements of Central Desert people because of an intense drought. The Ernabella mission was both a refuge and a resource for Anangu people. Pybus reports well-intentioned missionaries banning clothes. The Anangu wore them out bush but doffed them when entering the mission! Pybus also reports the saga of obtaining permission for Brownies to be allowed to wear uniforms so that they would have somewhere to stick their badges!

Chapter 16 by Gara (‘Ooldea, the Spinifex People and the Bomb’) is a tale of some Anangu being in the nuclear test prohibited area during the British atomic tests of the 1960s. We are left with a critique of governmental incapacity and ignorance, the government being unaware that Anangu people were moving to the edges of the bomb range to escape a drought. Brock provides an epilogue critiquing the Northern Territory ‘Intervention’ and the so-called ‘Basics Card’. She suggests that the paternalism of the 20th century lives on. 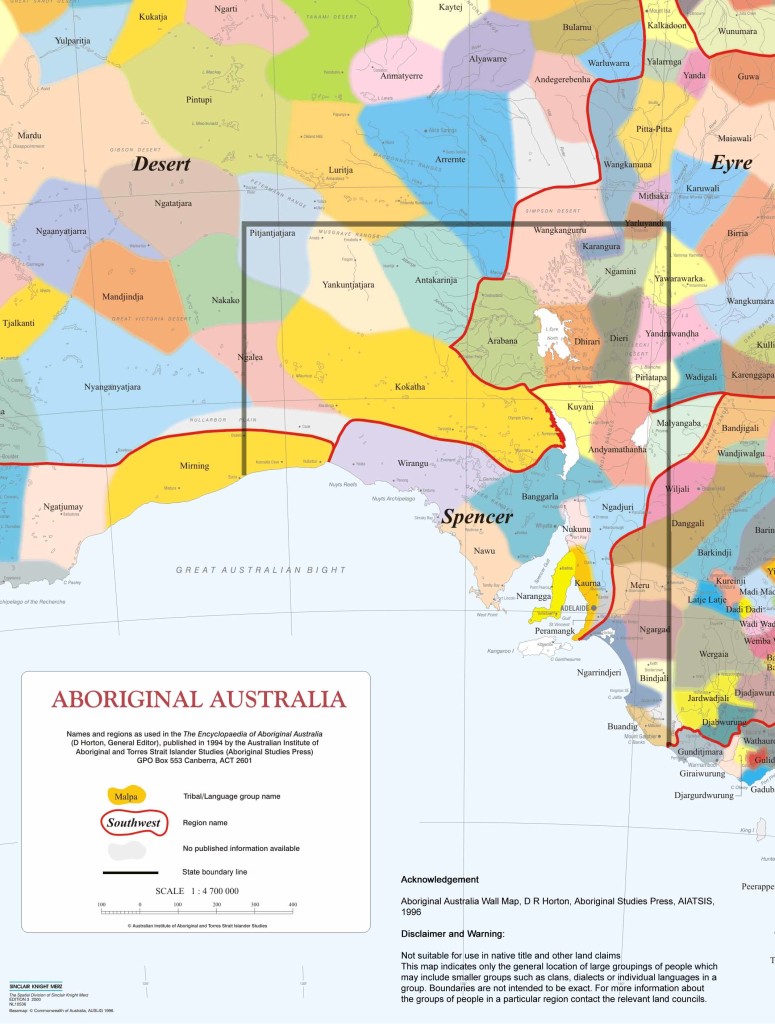 I enjoyed this book. It well illustrates how the experience of colonisation varied between Aboriginal groups in South Australia. This variance depended upon the date of their colonisation, their water resources, relative population densities, the terrain and ecology, as well as the placement of missions and ration stations. The book has also introduced new evidence based on Native Title hearings and its authors have made profitable usage of that evidence. This book’s chapters have interlinked broader narratives with local ones. The editors and their contributors are to be congratulated for a seminal contribution to South Australian history and an important one to Australian history.