From the Honest History Archives: Tangled up in red, white and blue

The Honest History website now includes more than 2000 posts and pages, many of them containing original writing. Readers can find these items under Themes and Resources (and the sub-categories under those categories) or by using our Search engine. With this proliferation of material, there also comes the opportunity to highlight again previously published items which we think have important things to say.

We have found a number of older articles have become popular again (perhaps as they are picked up in course reading lists) or have never lost their popularity. Peter Stanley’s review of Russell Crowe’s The Water Diviner has been viewed more than 27 000 times world-wide since it was first posted very early in 2015.

From our selfish point of view, too, recycling good articles from our archives gives us more time to devote to other projects. We have a particularly big one on the go, of which more news later in the year.

The first article from our archives is David Stephens’ piece, ‘Tangled up in red, white and blue’, an extended statement of our Honest History mantra, ‘not only Anzac but also [lots of other strands of Australian history]’. The article spells out the complexity of our history: of course, war is important in Australian history, because of what war has done to us far more than what some of us have done in war, but so are many other things. 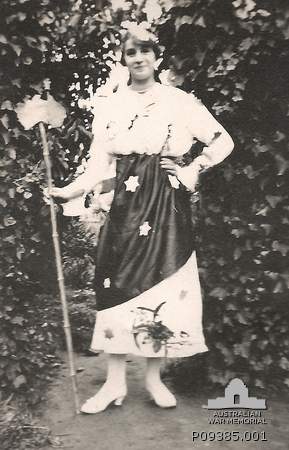 Nan Biggart, 1917, with Australia on a stick (credits in article)

Beyond vainglorious puffery [the article says], beyond distortion of our history, beyond expenditure on commemorative exercises that would be better put to alleviating the effects of post-traumatic stress disorder among soldiers returning from Afghanistan, there is the potential effect of “Anzackery” on our children. The hyperinflation of Anzac, the “militarisation” of our history – and the risk that these phenomena will accustom us and our children to war – should not be the legacies of the Australians of 2015. Normalising war by relentless and ubiquitous commemoration is more insidious than glorifying it but ultimately just as damaging.

Our military past needs to be recognised appropriately, as it is by the dignified elements of the Australian War Memorial, which deserve our continuing support as the national focus of commemoration. Constant plucking on the khaki strand, however, distorts the whole fabric and us. Australia was not born or did not “come of age” at Anzac Cove in 1915 just as it was not “born” at Sydney Cove in 1788. Our history is far too complex for such convenient lies. The men of Anzac were not superhuman; they were like us. Over-commemorating Anzac has been a phenomenon of the last 25 years; we need to shrink the Anzac motif to its deserved but proportionate place in our national tapestry.