Prehistory and marsupial lions: two from The Conversation (8 December 2017)

Michelle Langley summarises a new scientific paper which shows the turn towards Asia and Australia for evidence for humankind’s earliest history. Marsupial lions are even further back but also have an interesting story to tell, says Anna Gillespie.

Francis Markham and Nicholas Biddle in The Conversation suggest that the Closing the Gap approach ‘risks failing to acknowledge that statistical gaps are the result of powerlessness and a lack of resources. This blindspot matters because it suggests that gap-closing is only a technical policy matter, rather than also being a political issue.’

In October, researchers from the University of New South Wales and the Public Interest Advocacy Centre released a report which showed the STMP [Suspect Target Management Plan] was overwhelmingly aimed at young people and Indigenous Australians, and resulted in “oppressive policing”.

The cultural cringe should be so last century (8 November 2017)

Alison Carroll writes in The Conversation that overcoming that traditional and persistent Australian ‘cultural cringe’ really depends on making more of the oldest continuing culture in the world – which is also Australian.

The ADB’s Malcolm Allbrook writes in The Conversation about a project to redress the massive imbalance between white and black lives in this national institution.

Volumes One and Two of the dictionary were published in 1966 and ’67. Of their 1,182 subjects, only eight were Aboriginal. The early colonial years were portrayed as overwhelmingly the domain of powerful white males.

The balance has improved since but there is still a long way to go.

A book about frontier conflict in Tasmania (29 October 2017)

Government knocks back referendum for Uluru Statement from the Heart ‘Voice to Parliament’; Truganini and Wooredy; Indigenous disadvantage despite increased expenditure by government (27 October 2017)

The media release from the government.

The Turnbull Government has carefully considered the Referendum Council’s call to amend the Constitution to provide for a national Indigenous representative assembly to constitute a “Voice to Parliament”. The Government does not believe such an addition to our national representative institutions is either desirable or capable of winning acceptance in a referendum. Our democracy is built on the foundation of all Australian citizens having equal civic rights – all being able to vote for, stand for and serve in either of the two chambers of our national Parliament – the House of Representatives and the Senate. A constitutionally enshrined additional representative assembly for which only Indigenous Australians could vote for or serve in is inconsistent with this fundamental principle …

The Council’s proposal for an Indigenous representative assembly, or Voice, is new to the discussion about Constitutional change, and dismissed the extensive and valuable work done over the past decade – largely with bipartisan support. We are confident that we can build on that work and develop Constitutional amendments that will unite our nation rather than establish a new national representative assembly open to some Australians only …

The Coalition continues to aim to work in a bipartisan way to support Constitutional recognition.

ABC report, including comment from Senator Pat Dodson and others. Michelle Grattan in The Conversation. Calla Wahlquist in Guardian Australia, with comments from Indigenous representatives. Gabrielle Appleby in Inside Story.

The plan [Appleby argues] is not to create a “third chamber of parliament” in which new legislation is introduced, publicly debated, and potentially voted down. It is far more modest: to create a representative body that will ensure Aboriginal and Torres Strait Islander views are sought on proposed legislation that that will affect their interests. Once this is understood, it is clear that the proposal does not undermine the equality of our constitutional system or the notion of “one vote, one value.”

Cassandra Pybus (from Griffith Review 58, here extracted in The Conversation) on the journey of Wooredy and Truganini – Indigenous Tasmanians who ultimately ‘lived through a psychological and cultural transition more extreme than most human imagination could conjure’ – across Tasmania with George Augustus Robinson in 1830.

Nicholas Biddle in The Conversation asks why increased government expenditure does not seem to be making a dent on Indigenous disadvantage in its various manifestations. He looks at the most recent Productivity Commission report (linked) and concludes:

What we still don’t know (and can’t extrapolate from this report) is whether the money we are spending on Indigenous Australians is having any positive impact whatsoever. This report certainly doesn’t provide the data or the level of policy rigour to answer that much more important question.

The Whispering Gums blogger has another look at Carmel Bird’s (edited) 1998 book, The Stolen Children: Their Stories. The book, says the blogger, ‘contains a history that needs to be told – forever, alongside all those other histories taught to Australian students. It needs to be as well (if not better) known by our students as the story of The Gold Rush or Our Explorers. We need to know it, we need, as a nation, to know our dark side, our failures, as well as our big adventures and achievements.’

I think that perhaps imagination is one of the most important and powerful factors in the necessary process of reconciliation. If white Australians can begin to imagine what life has been like for many indigenous Australians over the last two-hundred years, they will have begun to understand and will be compelled to act. If we read these stories how can we not be shocked and moved …

There is a link to the full Bringing Them Home report.

Paul Daley in Guardian Australia writes that the copyright has, after a long battle, been transferred to the artist’s family.

It is a wonderful result for Namatjira’s legacy and, of course, his people. But it is also a salient reminder of just how oppressive post-colonial Australian society was for Indigenous people less than an average (white) lifetime ago, how pitifully slowly things have changed and of the enduring inequity between black and white Australia.

For more on Namatjira, scroll down to 22 July item in May-August 2017 page.

Jane Lydon in The Conversation explores the attitudes of colonial settler-artist George Hamilton to horses and to Indigenous Australians.

On the violent frontier, Hamilton was typical in defining the white colonist as victim and Indigenous Australian as persecutor, declaring in 1845:

“We may soon look forward to the time when murders perpetrated by the savage on the settler will be considered something more than a peccadillo, and we may hope to see the settler at liberty to protect his life and property without the fear of escaping the blacks’ tomahawk only to run his neck in the hangman’s noose.”

Here we see the emotional logic of Hamilton’s imperial cultural hierarchy and his political deployment of compassion. Suddenly, the seeming incongruity of Hamilton’s scorn for threatening Aboriginal people alongside his sympathy for the faithful horse makes perfect sense.

Lucino Crispino writes in The Conversation about Indigenous film-maker Warwick Thornton’s Sweet Country, on frontier violence in the Northern Territory in the 1920s. The fuss over allegedly racist Dove soap commercials brings back memories of Australian cosmetics and soaps which claimed whitening powers and used Aboriginal caricature figures to make the point. Honest History distinguished supporter, Liz Conor, writes in The Conversation.

Archaeologists and forensic scientists report on possible evidence of burning of bodies after a 1922 massacre in the Kimberley area of Western Australia. Local land council director, Wayne Bergmann, said, “It is really important for Aboriginal people to have the truth told, and I think it brings a level of relief to confirm that the stories passed on through generations and being retold in paintings has a factual base. This is real.” The full report will be published soon.

Update 1 November 2017: archeologists Pamela Smith and Keryn Walshe write in The Conversation, following the publication of their report in Forensic Science International (linked from the article).

We believe our research confronts a significant cultural boundary that – apologies aside – political leaders have failed to address. We cannot undo the past, but we can acknowledge that these events are part of both Aboriginal and white histories – they are real and Aboriginal people still suffer the pain of the past.

Aaron Corn writes in The Conversation about the legacy of Dr Gumbula relating to the Manikay song tradition which ‘perpetuates a body of knowledge that has enabled the Yolŋu to live in Australia for untold millennia’. A little earlier, we put together this collection provoked by the Seven Sisters exhibition at the National Museum of Australia.

Mungo Man, 40 000 year old remains unearthed 40 years ago at Lake Mungo, are to be returned home in November. (And they were.) The remains have been in the custody of traditional owners in Canberra since 2015. Paul Daley on repatriation of remains generally. Update 6 July 2018: 50th anniversary of the discovery of Mungo Lady. 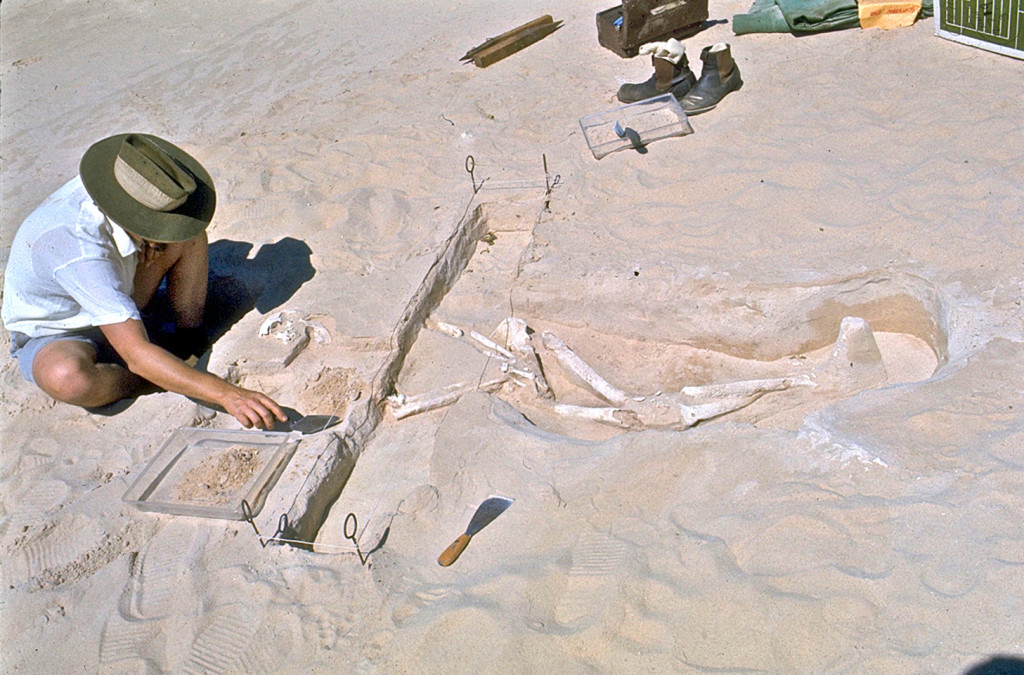 Removal of remains in 1974 (Welcome to Country)

A handy link from The Briefing to recent reports on Australia’s relatively high prison population, including a critique from the UN of Closing the Gap.

If monuments to colonial folly and violence are allowed to stand they must be interrogated in a manner that ensures that a more informed story is told. Complexity, though, is not the purpose and role of nation-building commemorations. Statues are erected to tell a simpler story; a story of uncomplicated hero worship. If we are to recognise heroes, then where are the stories of Aboriginal courage?

‘The teaching of Australian history is, still to this day, in most universities and high schools, superficial, nonsensical and wrong. Most Australians don’t know their own history, let alone the history I’m talking about’, says Professor Gary Foley from Victoria University.

Professor Foley talks about the (digital) Aboriginal History Archive and there are links to other relevant material.