Phil Cashen’s assiduous research for his Shire at War blog has turned up another fascinating story (Blog post 151: ‘The war against drink 2: the grocer’s licence at the Yarram Co-op Store’) which is, at one level, about the social upheaval caused by temperance advocates trying to impose their views, versus those who defended individual liberties while not necessarily denying the evils of alcohol.

There is also a martial angle, though, as

the early stages of the War saw a very close connection between temperance and support for the War. Temperance was advanced as an essential war-time goal and it was promoted, vigorously, at every level – the Empire, the Nation, the AIF and the local community. Specifically, in the Shire of Alberton there was an almost seamless connect between the call for temperance and support for the War. The local Imperial Loyalists of the Shire strongly supported both causes. Importantly, this group largely featured leading members of the local Protestant congregations, including their clergymen, as well as groups such as the local Rechabites. This demographic was naturally inclined to support temperance. 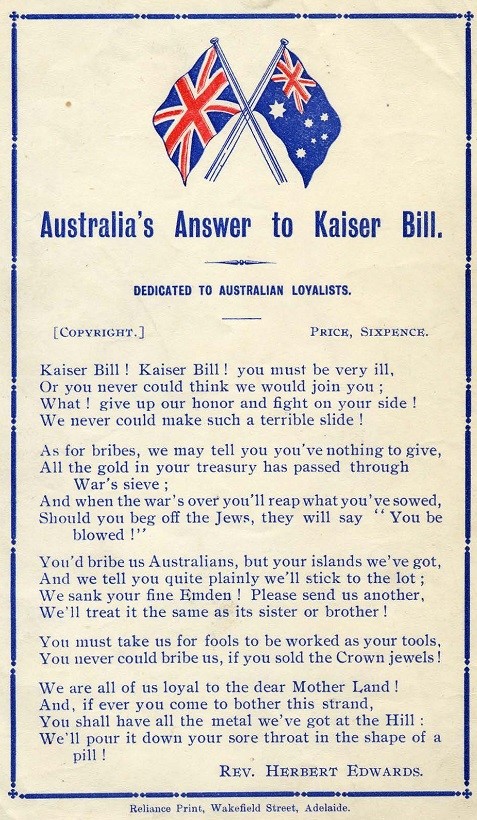 Possibly recited (soberly) in Yarram, though penned in Adelaide in 1915, a loyalist poem (SLSA)

Later, the Imperial Loyalists themselves divided over the temperance cause, though not enough to prevent them lining up together again to support conscription at the second referendum.

Other material from Shire at War may be found elsewhere in our ‘Divided sunburnt country’ series or by using our Search engine. A Rechabites pledge from Victoria 1910.