[Links checked 14 November 2017 and a couple were found to be broken, due to the passage of time. Honest History may be able to help users track down resources where a link is broken. Please contact admin@honesthistory.net.au. HH]

A speech, ultimately not delivered, describing five attributes of Anzackery and proposing a future for a ‘rebooted’ Anzac tradition.

Update 23 August 2015: ‘There will be blood’: ministerial remarks about the responsibility of children; talking about Turkey in the 1960s

Honest History’s David Stephens has published a piece on John Menadue’s Pearls and Irritations blog. It traces the obsession of authority figures, from high priests to elected politicians, with the concept of blood sacrifice by children. Evidence is presented from the recent speeches of the Minister for the Centenary of Anzac, Senator Michael Ronaldson.

The Anzac centenary has seen more than usual attention in Australia to the so-called ‘Ataturk words’ of 1934, with their reference to Johnnies and Mehmets and there being no difference between them. Honest History has been delving into the provenance of the words, in collaboration with Turkish scholars, particularly Cengiz Ozakinci.

Our latest foray looks at some material from the RSL papers in the National Library of Australia. Our earlier material is accessible from the links in that post or from our ‘Talking Turkey thumbnail.

Update 21 August 2015: war propaganda for children should not win prizes

Honest History media release on the winning of an ‘Honour Book’ award by the Department of Veterans’ Affairs/Australian War Memorial publication, Audacity, at the Children’s Book Council Awards. ‘Audacity is propaganda’, says Honest History’s Dr David Stephens. ‘It gilds the lily, it suppresses evidence, it tells only part of the story of war in the interest of recruiting children to a patriotic cause.’

An analysis of the PWC’s report on the Sir John Monash interpretive centre, to go with our earlier two articles. There is nothing in the report to alter our previous conclusion that this project is ‘a massively self-indulgent and boastful boondoggle, replete with meaningless puffery and rash assumptions’, as well as being a misuse of money from the Defence budget.

A boondoggle, for those who came in late, is ‘a project that is considered a useless waste of both time and money, yet is often continued due to extraneous policy or political motivations’. If anyone has a different view, a comment facility is below or under the article. Fire away.

Update 14 August 2015: we provide a comment on Turkish-supplied information from a 1989 book.

Turkish authority, Cengiz Ozakinci, provides (in English translation) his two new articles from Butun Dunya (Ankara). Our post provides a summary and links to both the Turkish and the English versions.

Most importantly, Ozakinci reveals that Sukru Kaya, putative speaker of Ataturk’s words, was an expert  translator of Ancient Greek texts and a pioneer of Turkey’s adoption of a form of humanism with Ancient Greek roots. Ozakinci concludes that Kaya’s words in the Dunya interview

So, not only do we still lack evidence (beyond Kaya’s recollections two decades on) that Ataturk ever said or wrote the words, we have Ancient Greek analogues. Following the Greek connection, Ozakinci also points to 1953 evidence of Ataturk being described as greater than the gods Athena, Hermes and Zeus and greater than Ulysses and the heroes of the Iliad. Ironically, perhaps, Greek legends complicate this Turkish story.

In our piece, we repeat that

we have never denied that the “Ataturk words” express an admirable sentiment. People may continue to believe, if they wish, regardless of the evidence, that the words are Ataturk’s. On the other hand, perpetuating myths, however sincerely, does not make them any less myths. Five hundred years ago, people sincerely believed the earth was flat.

Update 10 August 2015: Anzac and the politics of forgetting in Aotearoa New Zealand

Tim Leadbeater writes about the issues that get brushed aside in commemoration.

Cooktown in Queensland has renovated the public toilets in the town’s Anzac Park. 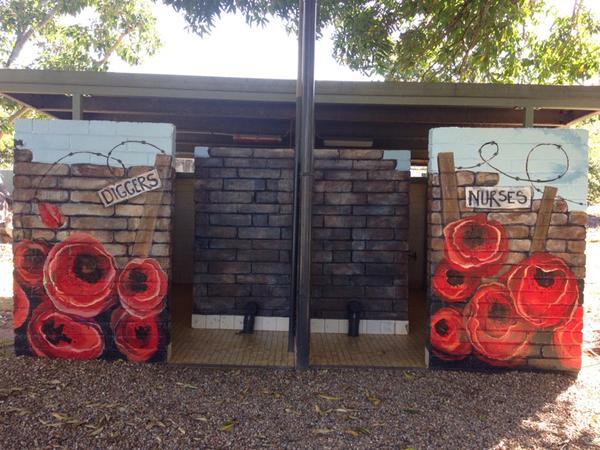 There are two more pictures on TripAdvisor, where four visitors give the park (including toilets) five stars as a tourist attraction and Gippsland Gypsy of Mirboo North says: ‘A lovely park and great place to reflect, the murals on the toilet block were fantastic make sure you circumnavigate the whole block as each side has a different mural, very taste full’.

Seems to have been a quiet month for Anzac centenary Minister Ronaldson, whose work we follow closely (Ronno’s Roundup). This gave us time to put some effort into analysing the Public Works Committee’s consideration of the Sir John Monash Interpretive Centre at Villers-Bretonneux, which anticipates many visits from the teenagers of Northern Europe. Meanwhile, we confirmed that the Australian War Memorial’s cock-eyed view of our war history carries through to its presentations to children, including the school holiday program, ‘Hands on History’.

The Hyde Park memorial in Sydney is to receive a $40 million update, with a cascading water feature and an education centre. The money is coming from the federal and state governments and the City of Sydney. The work is said to complete the original design. The memorial was opened in 1934. 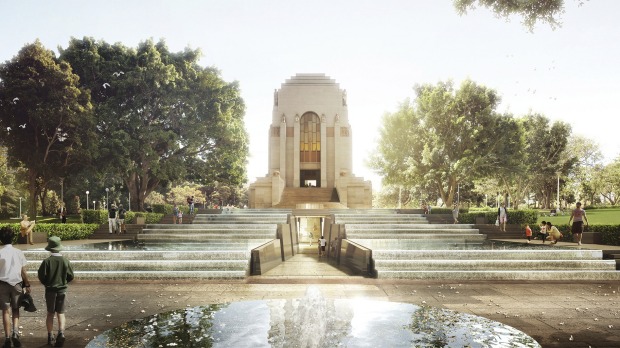 The proposed work produced a small flurry of letters to the editor including this from Anne McDonald of Summer Hill:

I can’t help but wonder whether our saturation-level focus on war “heroes” and the valiant sacrifice of young men who went away to fight and are now lionised, thus retrospectively giving their lives purpose and meaning, is in any way contributing to the pattern of present day young men wanting to fight overseas for honour and glory in a cause they perceive as righteous.

(Tim Robertson said something similar.) Another letter (from Ron Inglis of Strathfield) about excessive commemoration spending was the ‘favourite letter’ of the day, scoring 35 per cent of 354 votes.

Honest History’s analysis of the federal Anzac Centenary Local Grants Program has pointed out how unimaginative are the projects being funded. The projects’ focus on bricks and mortar and pageants reflects the criteria of the program, which is stuck in the preferences of the years immediately after World War I.

The states tend to go down the same track. Tasmania, for example, has given money to a children’s pageant, an avenue of honour, memorial pavers and memorial signposts. This is all to do with ‘finding inspiring ways to remember Tasmania’s involvement in military history’. The usual tired, oft-repeated theme.

By contrast with Australia’s other offshore island, Aotearoa New Zealand is attacking commemoration on a broad front. Under the thoughtful heading, ‘Is this just about the war?‘ the official New Zealand government commemoration website says this:

The events of 1914–1918 affected more than those who went away— they touched nearly every New Zealand family, every community, school, workplace and club or group. One indication of this wide-reaching impact is how many New Zealand communities, large or small, have a memorial marking the First World War.

The centenary commemorations will honour the service and sacrifice of those who fought, and will also tell the stories of the great majority of people who remained at home. With a generation of men overseas, women took on new roles that began to change our workforce and society. At a time of intense pressure to conform, the courage of those who opposed the war, including conscientious objectors, must also be acknowledged.

Many of the centenary activities planned for 2014–2019 focus on family connections, the places we live and work in today, the stories we tell and the freedoms we enjoy.

Events further beyond our shores (where people tend to refer to ‘the centenary of the Great War’ rather than ‘the centenary of Anzac’) are tracked by the wide-ranging Centenary News website. Currently thereon we can find digital memorialisation of soldiers on the Somme, a memorial to carrier pigeons, travelling poppies from the Tower of London display last year, sound mirrors on the White Cliffs of Dover – the mirrors were intended to give early warning of incoming enemy aircraft, Great War dead from Trinidad and Tobago, newly discovered German photographs, a conference in Brussels and an exhibition in Budapest, and some items about the Menin Gate. Australia gets a mention through Lone Pine Commemoration, the Hyde Park work (see above) and Hilda Rix Nicholas.

There’s also an item on a French exhibition about World War I facial injuries and reconstruction surgery, a subject which the British National Army Museum plunged into nearly a decade ago but which the Australian War Memorial has mostly avoided. There are some resources here.

To mark the centenary of Lone Pine, the Australian War Memorial shop has released some knick-knacks made from a branch salvaged from a descendant of the original solitary Turkish pine tree. This wood had been held in reserve for the occasion. The items include a lapel pin, a fridge magnet, a trinket box, a pine cone brooch and a set of coasters.

While the Lone Pine wood has had to be eked out with splinters of Western Australian jarrah, its  provenance seems to be more assured than has been the case with some famous icons of the past, such as the Berlin Wall (there are enough ‘certified’ chunks of that to stretch from Unter den Linden to Red Square), the fingernails of Saint Francis, and the pieces of the True Cross. Still, there is perhaps something odd about people in a secular society lining up to buy the Lone Pine merchandise. Are they icons or just conversation pieces? Then again, maybe the Memorial won’t sell many of them. We’ll check.

August 2015 marks both the 70th anniversary of the bombing of Hiroshima and Nagasaki and the 100th anniversary of the Battle of Lone Pine. Hiroshima-Nagasaki is an event in world history, Lone Pine an event in Australian and Turkish history. Though statistics are a crude measure, Hiroshima-Nagasaki killed at least 225 000 people, though no-one knows for sure, and Lone Pine killed about 4000 people.