In the Special Collections of the Australian Defence Force Academy’s (ADFA) Academic Library is a manuscript by poet Denis Kevans on the works of Australian soldier-poet Henry Weston Pryce (1891-1963). The 128-page manuscript, dated 1976, is the first draft of what became the thesis Kevans successfully presented in 1979 for the award of an MA in English Literature at Sydney University, under the supervision of Professor Leonie Kramer. The working title is simply ‘The poetry of Henry Weston Pryce’; the eventual thesis title was ‘The poetry of Henry Weston Pryce as an expression of historical experience, and the literary influences on his work’. 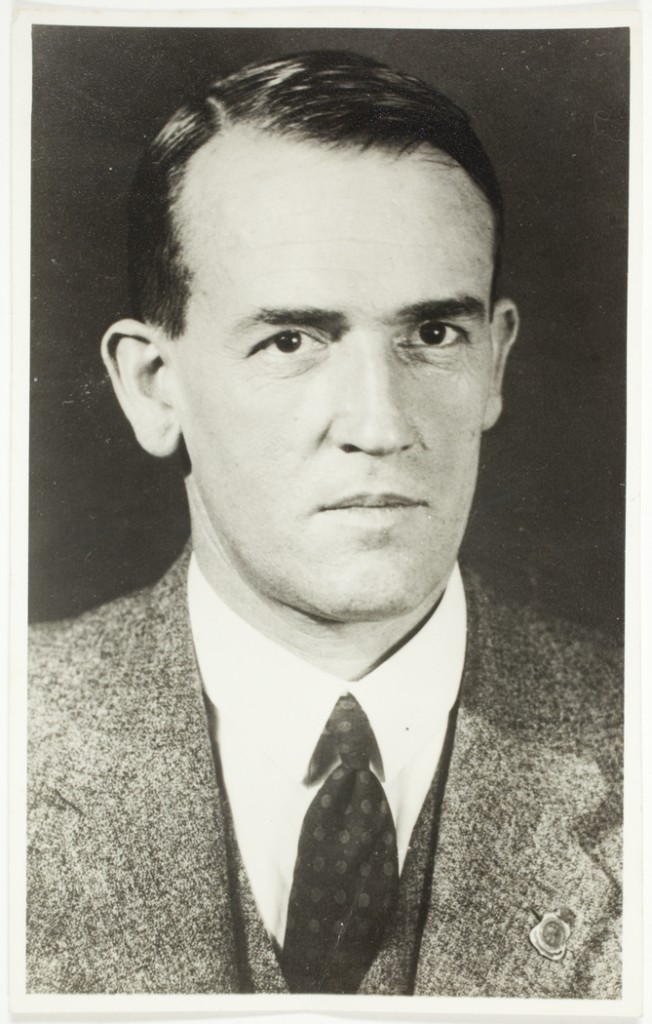 To date, the draft manuscript is the only surviving copy of Kevans’ work on Pryce, inquiries indicating the final submission is no longer in the archives of Sydney University, while continuing searches of the papers in possession of Kevans’ family have yet to locate the final version. The surviving draft is a typescript, with significant handwritten annotations by Kevans comprising copy edits, text and footnote additions, and notes to himself.[1]

Henry Weston Pryce was part of the 9th Machine Gun Company of the 1st AIF. Described officially as ‘a business organiser of Waverley (Sydney)’, he enlisted in 1916, aged 25, was seriously wounded in action in France at least twice, and returned home in November 1917. His two brothers were killed in the war. Pryce contributed poetry about the war and soldiering to Australian literary outlets under the pseudonym ‘Gunner 397’ and, on the strength of these, joined the staff of The Sun (Sydney) and became features editor.

Two anthologies of Pryce’s war poetry were published: Your Old Battalion: War and Peace Verses (Cornstalk Publishing, Sydney, 1926); Loot and Captives (W. Brooks, Sydney, 1929). An unpublished manuscript dated 1934, titled ‘The undefeated’, comprising 92 pieces (55 new poems, the remainder revised earlier pieces and items recovered from newspapers and periodicals) is in the State Library of New South Wales, Sydney.[2] For Kevans, the most important item of this body of work was Your Old Battalion.

In his typescript Kevans examines the literary influences on Pryce, in particular his debts to English poet Samuel Taylor Coleridge (1772-1834) and Australian war poet Leon Gellert (1892-1977). Kevans makes a powerful and convincing case for Pryce having produced ‘the most important published collection of poems by an Australian soldier about war in France in the years 1917-18’, Pryce writing ‘directly from experience’, capturing first-hand in a personally experienced way, the ‘mental, physical, and spiritual experience’ of the soldier at war. There is artistic and human poignancy in Kevans’ description of the war-torn poet, his ‘crushed mind struggling to express itself with inadequate cultural materials’, ending up producing ‘the best poetry we have of a thinking Australian soldier’s point of view’.

The key word in this judgement is ‘thinking’. Kevans demonstrates Pryce was a soldier who thought deeply and reflected profoundly upon his experiences, both during and after the war, questioning the patriotic impulses and rhetoric that took him to war and the propagandas and hatreds these engendered; rejecting romanticised ideals of military glory, heroics and sacrifice that fed the martial spirit prior to and during World War I; recognising the common humanity in the ‘enemy‘; condemning war profiteers and the political managers of war.

For Kevans, Pryce was ‘an irreplaceable part of Australia’s literary and historical tradition’, and he hoped one day a publisher would see fit to reassemble Pryce’s work and publish it with annotations and contemporary illustrations. Kevans tried to interest publishers in this project, but in vain, and it fell by the wayside. The ADFA manuscript is all that is left. That said, since the 1970s the wartime correspondence of Pryce and his 1916-17 diary-logbook have become available online.[3] 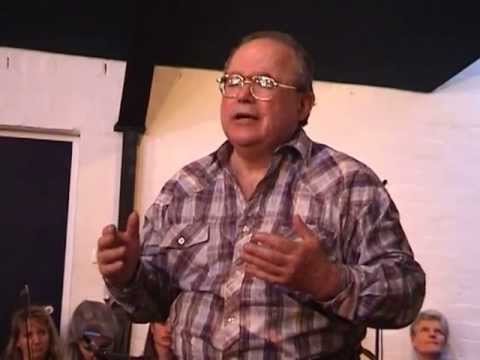 So who was Denis Kevans? During his life Kevans (1939-2005) was a songwriter, folk singer, public servant, labourer on building sites, trade unionist, teacher and journalist, but mostly he was a poet. We met in 1965 and I published some of his anti-war poems in the Sydney University student newspaper honi soit (‘The race’, and ‘A Vietnamese revolutionary talks to Jesus’ in particular).

Kevans’ poetry first took to the streets, literally, during the anti-nuclear campaigns of the early 1960s. But it was the Vietnam War that brought him to prominence, his verse challenging jingoistic and popular conceptions and understandings of Australia at war, dealing instead with the politics and harsh realities of war. Aspects of the Anzac Legend and the Vietnam War featured, and his work was significantly informed by his fascination with, and researches in, Australian history. Kevans was generous with his copyright and authorised multiple reprintings of his work. During the years from 1963 through to 1972, he was a familiar presence at anti-war gatherings and rallies, reciting his poems.[4]

The work of Kevans is collected in The Great Prawn War and Other Poems (1982), Ah, White Man, Have You any Sacred Sites? (1985), and The Bastard Who Squashed the Grapes in Me Bag (1991). Self-published, these anthologies were in part financed from royalties resulting from the use by the iconic band ‘Midnight Oil’ of one of his poems. Kevans went for big print-runs; his first collection of poems sold 2000 copies.

Conspicuously absent from the Australian literary canon, except for passing mention, Kevans is not one of those poets who make it regularly into Australian anthologies, though he was included in a mainstream anthology after his death.[5] Yet he and his work have had greater exposure to people – and more people have possibly engaged with his work and been moved by it – than can be said of many other Australian poets. Doyen of Australian writers Frank Hardy (1917-1994) once commented that ‘he reaches a wider audience than most poets’ and that in his comic verse ‘Denis is the funniest poet since Dennis’, a reference to the legendary Australian humourist-poet CJ Dennis (1876-1938).[6]

Mostly Kevans published in social movement publications, with his poetry – much of it satirical and humorous – championing trade union, social justice, anti-war, and environmental causes and issues. As noted above, he performed his work, too, and had a clear and dramatic public speaking voice and knew how to work an audience. For example, at the Palm Sunday anti-nuclear rally in Sydney, 1984, he held an audience of 150 000 people.

For Kevans, poetry was meant to be read, heard, understood. He was not about writing for ‘quiet contemplation’, or about writing clever stuff for fellow poets, or writing to demonstrate artistry and technique. Which is not to say he was not schooled in the classics nor that he was unaware of poetic techniques. Indeed, he came out of the Catholic school system and had been a boarder at the prestigious St Joseph’s College, Hunters Hill, Sydney, before briefly enrolling in Medicine at Sydney University. From a working class background, Kevans had attended St Joseph’s on a scholarship awarded on academic merit.

Medicine, however, was not to be his way, and Kevans became instead a public servant, then a labourer, before completing a part-time Arts degree at Sydney University, getting a teaching qualification, and thereafter variously making a living via journalism and teaching. 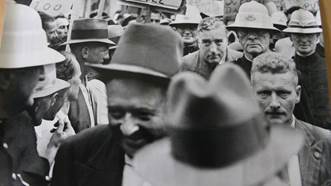 During the last decade of his life, Kevans researched and wrote a biography of Waterside Workers’ Federation of Australia militant Ted Roach (1909-1997), most famously identified with the leadership of the Port Kembla pig-iron dispute in 1938-39 banning the shipment of Australian pig-iron to Japan in protest against Japanese militarism. It is hoped this manuscript will eventually find a publisher.

Rowan Cahill (born 1945) has worked as a farmhand, teacher and  freelance writer and for the trade union movement as a publicist, historian, and rank and file activist. The writing of this article has been helped by his file of correspondence with Denis Kevans, 1973-2005, and information provided by his daughter, Sophia Kevans.

[4] Kevans’ poetry was the subject of a paper by Jefferson Lee at the 2015 National Australian Labour History Conference in Melbourne. A version of this is online: Jefferson Lee, ‘From Gallipoli to Iraq: the anti-war peace poems of the late Denis Kevans (1939-2005)’.

[6] Hardy made the comment in a significant appreciation of the work of Kevans published on the back cover of Kevans’ first anthology, The Great Prawn War and Other Poems (1982).

Print This
Click here for all items related to: Australia's war history, Expressing ourselves, War literature