Broinowski, Richard: This book will increase hostility between Australia and China

‘This book will increase hostility between Australia and China’, Honest History, 19 August 2022

As I write, the risk of war with China over Taiwan grows exponentially. Nancy Pelosi’s provocative visit to Taipei on 2-3 August 2022 was followed by prolonged Chinese air and sea war drills around Taiwan. 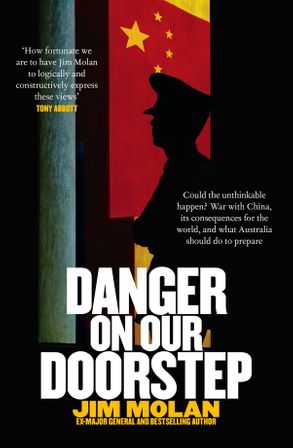 It has begun to dawn on Australian observers that these exercises were not merely political theatre, and that war between China and the United States is a distinct possibility. Ill-informed megaphone diplomacy is beginning to be seen as a dangerous accelerant. In an uncharacteristically moderate pronouncement, Opposition Leader Peter Dutton said he respected China’s position in relation to Taiwan and did not support Taiwanese independence.

However, in his latest book, Danger On Our Doorstep, former Australian soldier and senator, Jim Molan, has added fuel to the flames. In italicised passages at the beginning and end of his book, Molan outlines a probable near-future scenario – a second Pearl Harbor, this time carried out by China, not Japan. Chinese medium and long-range missiles will be launched suddenly and without warning against American bases and naval assets in the Western Pacific. They could extend to ‘criminally-unprotected’ US bases as far as Diego Garcia, Japan, and the Republic of Korea, even Australia. Chinese submarines could at the same time mine ports containing US naval vessels, including Sydney Harbour.

In the confusion and chaos, Molan asserts that Taiwan will be ripe for an invasion by the People’s Liberation Army. China would aim to keep the conflict non-nuclear if possible and hope that America would also. But it would even risk such a holocaust because, of all the nuclear-armed countries, China is the only one to declare itself capable of surviving a nuclear war.

Molan then asserts that the US is quite unprepared to cope with such a situation. Its people are weary after a series of unsuccessful wars. Its military power has been reduced 30 to 50 percent since the end of the Cold War. It can no longer fight major wars on two different fronts simultaneously – a firmly held Pentagon belief throughout the Cold War.

Establishing a naval ‘blocking force’ in the Taiwan Straits is no longer credible. Nor is the possibility of getting any support from Asian neighbours. South Korea is too concerned about possible attacks from the North. Japan is inhibited by its peace constitution. The countries of South-East Asia play their own games with China and are uninterested in supporting those of the United States.

And Australia? According to Molan, successive governments are delusional about the capacity and willingness of the US to protect us, just as we were delusional about the capacity and willingness of the British to defend us when we sent our under-equipped and under-trained troops to North Africa to fight Hitler in World War II. Molan wants the Australian Defence Force armed with much more deterrent kinetic power – hard-hitting medium and long-range missiles, based in Australia, in the air, and on Australian drones, ships and submarines.

Contradicting his main theme, however, Molan says he is comfortable with AUKUS, so long as we realise the limitations of US power and accept our responsibilities over the medium to long term to make ourselves self-reliant within the relationship. For, if his prediction about an imminent Chinese Pearl Harbour is correct, we have no time to acquire such deterrent forces.

Molan mirrors prevailing anti-Chinese elements in the Canberra bureaucracy and so-called independent think tanks. Their mantra is the inevitability of a Chinese invasion of Taiwan, the bullying, even subjugation, of neighbouring Asian countries, and the use of China’s Belt and Road Initiative economically to colonise other countries in South Asia and Africa.

It is a tactic of professional diplomats accredited to a country hostile to their own to construct a dialogue in areas of possible bilateral cooperation, such as culture, education, or climate change.  Controversial issues are held back until there is some basis for constructive exchange. This is what Xiao Qian, China’s new ambassador to Canberra, attempted to do in his address to the National Press Club on 10 August (in full). But he was confronted by journalists anxious to get him to admit that China would take Taiwan – its own province – by force if all other avenues were closed. Officially, Xiao was unable to deny such allegations, and his earlier conciliatory remarks were forgotten in the rush to create sensational headlines.

The impact of Jim Molan’s book will unfortunately be to increase hostility in Australia towards China, and in doing so, risk a war in which Australia will almost certainly be one of the losers.

Below: Senator Molan’s letter to the National Press Club, complaining that it gave a platform to Ambassador Xiao (Twitter) 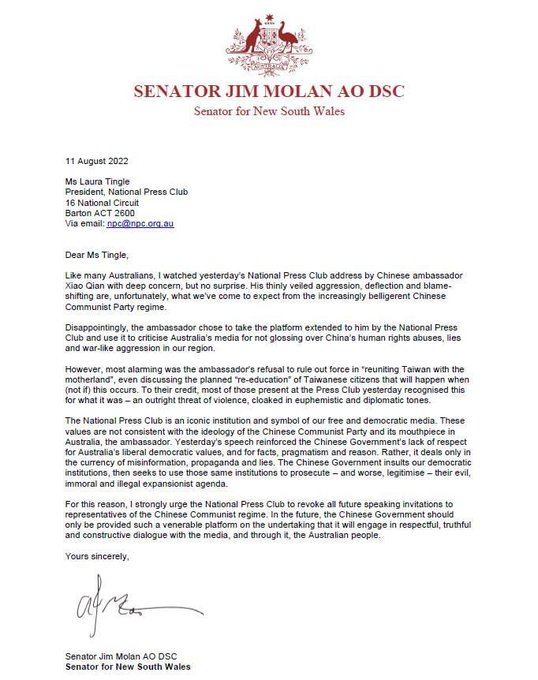