Broinowski, Alison: Review note: What was all that about? Abe Forsythe’s Down Under

‘Review note: What was all that about? Abe Forsythe’s Down Under’, Honest History, 12 September 2016

A longer version of this article, taking up more general issues to do with Afghanistan, is here on Pearls and Irritations.

A decade on from the Cronulla riots, Abe Forsythe took his crew to Kurnell (standing in for Cronulla) to make a movie. Down Under (2016) has an all-Australian, mainly male, Lebanese and Anglo cast. It starts with footage of the 2005 Australia Day festivities, complete with flags, tatts, half-naked bodies, close-ups of yelling mouths, girls and guys pushing, shoving and punching, mounted police, and arrests.

Abe’s script begins on the next day, with two carloads of men, mostly young, bent on revenge. One lot wants to retaliate for insults to them and ‘their’ women, while those in the other car (no slouches at insulting their own women, too) are defending their turf. ‘And so it’s about these two sort of contained environments of angry young men looking for some outlet for this aggression and inevitably they do meet’, Abe says in an ABC 7.30 interview. 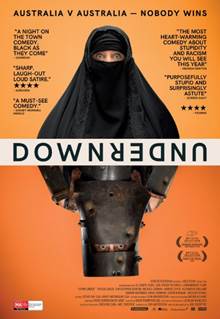 On one side are the ‘Skips’. As they prepare for the clash, the father of one of the Skips produces his grandfather’s Lee Enfield rifle, with a single bullet, and solemnly hands them to his son, saying it is the proudest day of his life. What follows is a lot of confusion, profanity, dope and blood, some broken bones, one death, two smashed-up cars, and in the end, some head-scratching perplexity about what all that was about. As war historian Henry Reynolds writes, it has been the same since 1901: from then on, ‘the central question became how they fought, not why they fought’ (Unnecessary Wars, 2016, p. 209).

Down Under is comical, and has some great lines. But its real life story – about xenophobic violence in Australia − is no laughing matter. ‘One of my Middle Eastern cast members, Michael Denkha, who plays Ibrahim, they were getting out of a car, being driven to set’, Abe recalls. ‘A car load of four Anglo people drove past and saw a Middle Eastern man with a beard and all shouted, “Aussie, Aussie, Aussie” when they saw him’. Beating each other – especially the Other – up, it seems, is what some unenlisted Australian men want do in wartime, with no idea why. And this is indeed wartime: we were at war in 2005 and we still are. Abe could have made a similar film about the Australian troops in Egypt in 1915, the Brisbane riots in 1919, or any of the other episodes of xenophobia that adorn our war history. In an interview for the Sydney Morning Herald, Forsythe reckoned we are more racist now than we were in 2005.

Regrettably, Abe’s movie has disappeared without trace. Even though reviewers gave it four stars, it was shown only at one theatre in Sydney and, by the time the word got around, it was gone. Perhaps we could get it back for an Honest History benefit screening. Meanwhile, there is this SBS presentation on Cronulla, this article by Paul Daley about Cronulla and Anzac, this on Fairfax, this on News, this small collection on race riots in Australia, including Cronulla, and a trailer of the film.