Bombing of Darwin remembered – in context

Update 10 March 2016: a new book by Brett Bowden on the bombing of Darwin.

The new Minister for the Centenary of Anzac, Dan Tehan MP, has issued his first media release. It marks the 74th anniversary today of the first bombing of Darwin.

The Minister rightly points out that more than 240 lives (civilian and military) were lost in that first attack and much of Darwin was devastated. There were further attacks on Northern Australia later in 1942 and in 1943 with less significant casualties, though up to 100 died in Broome.

Every life lost in the bombing of Darwin and Northern Australia was, of course, a personal and family tragedy but those death tolls need to be placed in context: 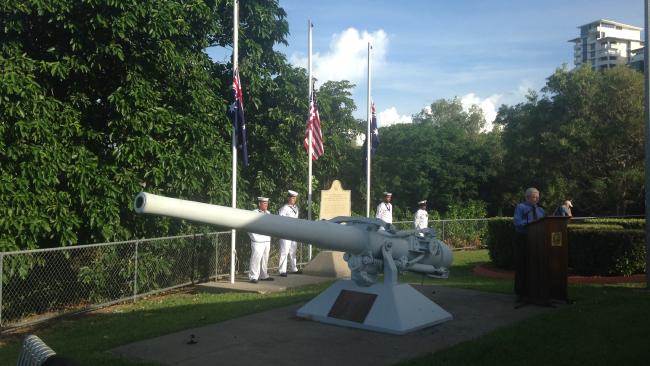 ‘The Territory’s World War II heritage is one of its greatest tourism assets’, according to Chief Minister, Adam Giles. Another notable element of the Darwin bombing of 1942 has been the tourist revenue arising from it. (And the hyperbole: one of the Chief Minister’s press releases refers to ‘the deaths of thousands of people’ during the attacks of 1942-43; the Australian War Memorial here and here and Wikipedia, summarising authoritative figures, put total deaths from the attacks at less than 400.)

The NT Government has launched ‘The Territory Remembers: 75 Years’, in anticipation of next year’s 75th anniversary of the Darwin bombing. Commemorative posters were released today. The accompanying media release refers to ‘a number of appropriate, respectful projects leading up to the 75th anniversary next year’. The government is putting $2.25 million into the initiative.

Today’s Northern Territory News treats the 74th anniversary in a fairly low-key way, with standard fare about the details of the bombing, the 93 year-old soldier reminiscing about the event, and a photo (from last year) of children laying a wreath. A picture of an early morning ceremony (above) shows Australian and United States servicemen in front of flags at half-mast. (US Marines are now based in Darwin bringing further financial spin-offs for the Territory.)

Darwin academic Alan Powell wrote in 2013 about how the commemoration of the Darwin bombing has become a tourist money-spinner. Powell showed how the commemoration of this event has been woven into the fabric of Territory history and, specifically, into its tourist industry. He considered commemorations in decade intervals from 1942. In 1952, there was a brief ceremony. Ten years later, the Northern Territory News reported a ceremony attended by just 200 people. By 1972, the numbers were down to 100.

The change came after Territory self-government in 1978. In 1982, the Territory government organised a much more elaborate ceremony and, Powell notes, the theme of the commemorations by this time had become the heroism of locals rather than the panicked shambles that had marked the original event. This trend continued through the nineties.

In 2002, the 60th anniversary of the raids, the Territory government assisted 800 veterans and their families to visit Darwin, with commensurate benefits to local business. Ten years later, in 2012, the commemoration reached new heights, with the government putting $10 million towards building a multi-media ‘Defence of Darwin Experience’ (plus smart phone app), 40 commemorative events, including a black-tie ball, a commemorative AFL match, and ‘A minute’s warning: a one-off wearable art production showcasing creations inspired by the bombing of Darwin’.

Not surprisingly, then prime minister Gillard responded to all this pushing from the North by making 19 February a new ‘national day of commemoration’. ‘Apart from the five commemorative ceremonies’, Powell concluded, ‘nearly all of the planned events were principally concerned with tourism, commercial opportunity and/or politics’.

Every country privileges commemoration of its own wars over everyone else’s. But Australia seems remarkably good at relentlessly and repetitively commemorating our relatively small parts of the wars that have affected us. If we really wanted to ‘punch above our weight’ perhaps we could become international pioneers of non-parochial, non-self-referential, non-profit-making commemoration.