Bombing of Darwin 76 years on: Territory tourism to have even stronger khaki tinge (but focus is still too narrow)

Minister for Veterans’ Affairs pro tem* Michael McCormack reminds us that today marks the 76th anniversary of the bombing of Darwin in February 1942. Around 400 people were killed in Darwin and in later raids on other northern towns. 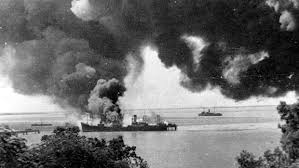 Meanwhile, the Northern Territory government has announced it will spend $1.9 million on ‘cementing the NT as a Military History destination’. This is part of a set of new initiatives under the heading ‘Turbocharging tourism’. ‘Military history is a big draw card for tourists and we have an incredible story to tell – this funding will allow us to promote our story’, Ms Moss [the Minister] said. ‘We want military history visitors to see Darwin and the NT as the ultimate pilgrimage destination in Australia.’

We’ll stick with that summary.

To put today’s tropical remembrance of bombing in another context here is a summary of other significant World War II bombing, compared with Darwin (again taken from our 2017 post).

Every death in war is a tragedy but there were many more tragedies in the bombing of places in the world other than Darwin. It’s just that Australian commemoration – particularly the official version of it – doesn’t take much notice of them.

The final chapter of The Honest History Book makes the point that the impact of all our wars on Australia ‘pales beside the overall global impacts. Yet we act as if it does not – and that is national narcissism. If we are ever to value humanity as a whole, we need to cease [as Meanjin magazine’s Jonathan Green says] “setting Australian life and sense of loss above this common muddle of bones and blood”.’ If Minister McCormack stays in the job perhaps he could make it his business to broaden our commemorative focus.

The Bombing of Darwin Day has been a national day of observance since 2011. The Northern Territory Government will recognise the anniversary by conducting a National Day of Observance Commemorative Service in Darwin today.

* The Minister has been touted as a possible new leader of the National Party. Should he be elevated, he would be unlikely to retain the Veterans’ Affairs-Centenary of Anzac portfolio. Watch this space.