Back to Gelibolu: The Water Diviner reviewed

‘Gallipoli!’ demands Joshua Connor of a Turkish immigration clerk. ‘I want to go to Gallipoli!’ It is 1919 and the Mallee farmer (Russell Crowe) has ingested the Anglo-narrative of the invasion, heroism, sacrifice, and all. He has lost three sons in it, and his wife, her last wish before her suicide being that Joshua should find their sons and bring them home. 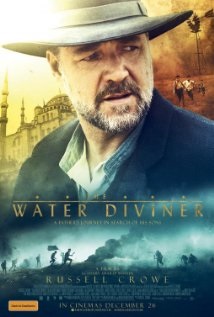 Joshua soon learns from a courteous Turkish army officer (Yilmaz Erdogan) the vital statistics of the invasion – some 85 000 Turkish dead, 26 000 Australian casualties. The Turks, he hadn’t realised, were defending their homeland, while the Allies were fighting – for what? ‘A principle’, says Joshua, at which the Turks laugh knowingly, telling him war is always about territory. Australia’s got enough land already, he says. But he doesn’t go into what the principle might be or what territorial ambitions Australia’s British allies had, leaving those for filmgoers to reflect on.

An Australian colonel working with the world’s first war graves commission has to remind his sergeant that World War I is over. But it’s not over for the Turks, who are still contesting territory (as they have for more than a millennium) with the Greeks.

A Kiwi soldier, a young British naval lieutenant, and several Turkish nationalists at personal risk, speed Joshua on his way to search for his missing sons. He is a successful water diviner and can sense exactly where his sons died at Lone Pine, to the amazement of the war graves teams. The remains of two sons are found. Later there are revealed the fate of the third son and the outcome of Joshua’s search for him through beautiful Turkish villages amid ongoing violent conflict. I won’t spoil the story here for moviegoers waiting to see the film in the New Year.

Dedicated to avoiding Anzackery, particularly in 2015, I was talked into seeing the preview of The Water Diviner and was rewarded and relieved. It avoids all the CEW Beanery that I anticipated and shrewdly subverts a lot of it. I never watch physical violence, so all I know of the film’s flashbacks to 1915 is the loud soundtrack; I’ll leave commentary on that to more honest historians. But they may find themselves sharing, as I did, the Turkish defenders’ delight when, after eight months, the Allies withdraw. One in the eye for our militaristic national culture.

One comment on “Back to Gelibolu: The Water Diviner reviewed”