Recently Honest History collected some material on China-Japan-Australia-US relations and ran it under the heading ‘Spratlyswatch’. While the events in the East China Sea that provoked us to that initiative seem to have settled down a little – or at least are attracting less coverage – the longer-term implications remain important. In Australia’s case there are linkages to our historic foreign and defence policy preferences – our hankering for ‘great and powerful friends’, our need for markets and our strengthening networks in the global economy.

In this atmosphere, a team from the ANU’s Strategic and Defence Studies Centre and the American Center for Strategic and International Studies, wrangled by Andrew Carr, has produced a discussion paper entitled The Anzus Alliance in an Ascending Asia. The paper commenced in this fashion:

In 1942 it was said that Australia turned its back on tradition and kinship when it looked to the US. Yet in the early 21st century these words now embody the relationship between Canberra and Washington. The first line written in any Australian strategic policy is the link with the United States. And the US is often able to pencil in Australia’s name at the top of any roll call of support when it looks to act around the world …

The report offers a number of clear policy recommendations that reflect the different viewpoints of the authors as well as the varying concerns of their countries. That some of their suggestions might be challenging or push each country in ways they may not prefer speaks to the serious questions that have been raised by the authors as they attempt to ensure the ANZUS alliance continues to be foundational strategic policy for both the United States and Australia. 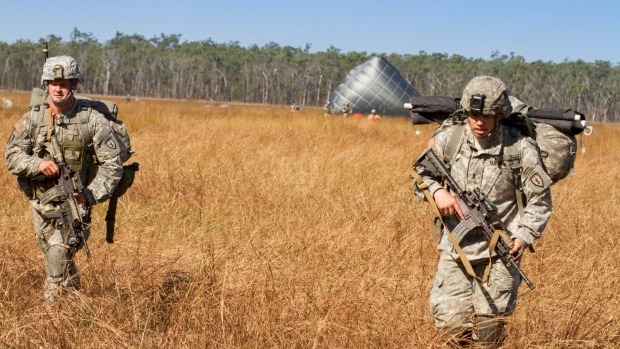 The authors summarised their position in a piece in Fairfax media. A forthright critic of this position, Mark Beeson, complained of the authors’ ‘remarkable uniformity of opinion’ within a paper which exemplifies the ‘ANZUS-boosting genre’. Beeson regretted that the authors did not attempt to engage with thinkers of a different bent, such as Hugh White.

In other reaction to the discussion paper, the prime minister refused to countenance the suggestion in the paper that there was a risk of Australia being involved in a military conflict with China. Meanwhile, a defence exercise in the Northern Territory (Talisman Sabre or Saber) involving Australia, the United States and Japan, while not the first of its type by any means, was seen by some as a rehearsal for future hostile operations against other powers in the region. Greens Senator Ludlam described Talisman Sabre as training for ‘expeditionary wars and invasions’ and added: ‘I don’t think we should be preparing for a war with China … I don’t think we should be participating in that kind of provocation.’

Finally, taking a broader view, Kerry Brown questioned whether the ‘great and powerful friends’ trope, whoever the friends might be, was any longer appropriate for Australia.

Australia needs a far more dynamic vision of its role in the world, and a better sense of self-confidence in its diplomacy. Self-deprecation is fine up to a point, but not when it makes a nation look and sound slavish. Australia doesn’t need to beg either America or China to maintain good relations. It should regard these as privileges on both sides. And if the call ever comes in the middle of the night, one hopes the prime minister who takes it has the confidence and eloquence to point this out, and to ask the president to call back the next day, in working hours, with a more sensible request.