A review of Roland Perry’s Monash and Chauvel: How Australia’s Two Greatest Generals Changed the Course of World History

Let’s get it out of the way at the beginning: John Monash and, to a lesser extent, Harry Chauvel, were extremely capable and successful commanders in World War I. Each demonstrated qualities of leadership that deservedly won them the respect of their peers, of contemporaries, and of historians.

Monash led a brigade at Gallipoli, a division, and then a full Army corps on the Western Front with distinction, growing into the job as his learning and practical experience in civilian life and as a militia officer were tempered by experience of warfare. His broad education as an engineer and a lawyer, his career in construction and the law, allied to a broad interest in subjects beyond his immediate professional concerns, may have equipped him better for high command in a rapidly evolving industrial-scale conflict than the more limited training and experience available to professional soldiers at that time.

Coordinating the various factors that had to come together in a successful battle plan came naturally to Monash: he was receptive to new ideas and emerging technology and not hidebound by military tradition. Monash’s strength of character and obvious abilities enabled him to overcome the prejudices attaching to a ‘colonial’, a citizen soldier among ‘professionals’, and, perhaps most difficult of all, his German and Jewish origins.

Chauvel’s career was more predictable: a professional soldier before the Great War and who had served in the Boer War, he, too, commanded a brigade at Gallipoli, a division in the Middle East and, finally, the Desert Mounted Corps. That corps was composed predominantly of the Australian Light Horse and included at various times other mounted formations from the British Army. It played a decisive part in the key battles of the Sinai, Palestine and Syrian campaigns, where mobility was vital throughout the campaign. The then Commander-in-Chief in Egypt, Major General Sir Archibald Murray, described Chauvel in 1916 as a ‘resolute and resourceful cavalry leader’, while Murray’s Chief of Staff wrote that the Light Horse ‘are without doubt the only reliable mounted troops we have’.

Both Monash and Chauvel understood the distinctive character of the all-volunteer Australians, tolerated their sometimes indifferent discipline away from the front and adapted their own leadership styles to their troops’ democratic temper. They shared the widespread horror of the high casualties that modern weapons could inflict on troops and thus sought to minimise casualties through careful planning and, particularly in Monash’s case, adoption of new technologies and techniques.

As characteristically reserved Australians with a distaste for big-noting ourselves, we should all take a quiet pride in the achievements of Monash and Chauvel, noting that Monash particularly is widely memorialised in a university, a Canberra suburb, streets, a new education centre at Villers-Bretonneux, buildings, statues, prizes, a school house at his old school and a distinguished scholarly biography – the whole panoply of means by which a nation shows its respect for its significant historical figures. Having just passed the centenary of the Beersheba charge it is fair to say that the achievements of Chauvel and the Light Horse are hardly being forgotten either.

For Roland Perry, however, all this is not enough. Monash and Chauvel ‘changed the course of world history’. Monash and his warrior force were ‘the driving force in defeating the German Army’. Monash is ‘a military genius … decades ahead of everyone else in his prescience and vision’, ‘more aware than any other Allied general of what was at stake [in World War I]’, ‘[had] a far greater comprehension of the war’s state of play than any other commander’. ‘Only one key officer, Monash, kept abreast of every single weapons development…’

This hyperbolic book is a brief of evidence for the campaign to promote Monash and Chauvel to the rank of Field Marshal, to ensure ‘appropriate’ recognition of ‘the most important generals and their armies on two of the three major fronts of the Great War’. Unfortunately, in his enthusiasm to promote this cause, the author removes his protagonists from their historical context and makes inflated claims for their originality and the significance of their achievements – which is a great pity because any balanced historical estimate will rank them both very highly.

In considering Chauvel’s career, for example, the reader of this book won’t find any acknowledgement that the Ottomans were engaged on a number of fronts – in Mesopotamia, Eastern Anatolia, the Caucasus and the Balkans – throughout the war. Far from the Battle of Romani in August 1916 forcing the Ottomans ‘to retreat for the first time in the Middle East war’ they had already suffered a disastrous defeat at Sarakamis at the end of 1914 at the hands of the Russians, who had then invaded the Anatolian heartland. Between February and April 1916 the Russians seized major cities including Erzurum and Trabzon. 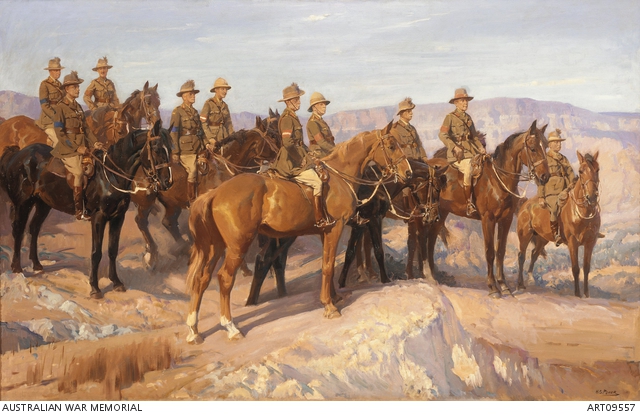 An earlier Ottoman attack on the Suez Canal in February 1915 – it succeeded briefly in establishing bridgeheads on the western side of the Canal – was driven back with heavy casualties. In Mesopotamia, the Ottomans had been forced some 500 kilometres along the Tigris from the Persian Gulf to the outskirts of Baghdad before the British, mainly Indian, Army was besieged and forced to surrender at Kut in April 1916.

Chauvel’s contribution to victory on this front has been overshadowed by the militarily less significant contribution of Lawrence, Feisal and the Arab rebellion. In terms of ‘changing the course of world history’, however, the collapse of the Ottoman Empire was the result of much more than its defeat in Palestine and Syria. The consequences of the betrayal of the Arab Revolt, the Sykes-Picot carve-up, and the Balfour Declaration are of much greater significance.

Then there is Monash on the Western Front. In Perry’s view, Monash is at the centre of events almost from his arrival in France. Perry’s description of the Battle of Messines in June 1917 is typical of this approach. Perry describes the battle as an ‘Australian operation with New Zealanders in support’ and it is clearly implied that the battle plan was Monash’s. The operation was in fact carried out by three army corps – two British and the II ANZAC – of the British Second Army commanded by Herbert Plumer. To suggest ‘the blowing of 23 mines’ was part of ‘Monash’s meticulous plans’ and that ‘by nightfall Monash had secured the entire ridge’ – this described as ‘Monash’s crushing but quick win’ – is misleading and a gross exaggeration of Monash’s overall responsibility as a divisional commander.

Of course, Monash’s Third Division did perform well and did make a significant contribution to the success of the battle, as did the Fourth Division and the New Zealand Division, but so did the two British Corps, the X and XI. The planning and conduct of the battle was dominated by Plumer and his very highly regarded Chief of Staff, Harrington. It does Monash’s reputation no service, and is wholly unnecessary, to make such inflated claims for his role. All too often praise of Monash (and Chauvel) or his troops is combined with slighting references to other Allied forces.

This also shows Perry’s failure to put Monash’s accomplishments in their proper context. Plumer, the Second Army commander, belied his blimpish appearance by having a very fine military brain (and he was not alone among Allied generals in this). By joining Second Army, Monash became part of an army that was already making innovative use of sophisticated creeping barrages and counter-battery fire, flexible infantry units, tanks and aircraft – all the components he was going to refine, develop and use with distinction in 1918 as commander of the Australian Corps. As New Zealand historian Christopher Pugsley argues:

It was not until Birdwood’s I ANZAC Corps was posted to Plumer’s Second Army … that his Australian divisions were able to absorb the organisational changes within infantry battalions and train on the tactical doctrine increasingly the standard in all armies and more importantly match it with performance in battle.

By concentrating on the decisive role of great men, the author plays down the importance of materiel and logistics, and particularly the huge efforts across all the Allied armies that went into learning from experience, refining tactics, developing technologies and training troops at all levels, such that by late 1917 virtually all the factors that were to characterise Monash’s operations in 1918 were in place. Australian historian Robert Stevenson suggests that Monash’s victory at Hamel – a small masterpiece – far from being a uniquely innovative battle, represented British Expeditionary Force ‘best practice’.

Monash’s biographer, Geoffrey Serle, was generous in his praise for his subject. Serle could nevertheless write that Monash ‘had the first attribute of a great general – good luck – in that he took command of a magnificent instrument just when the tide was about to turn conclusively in the Allies’ favour, and he was never compelled to fight with the odds against him’. 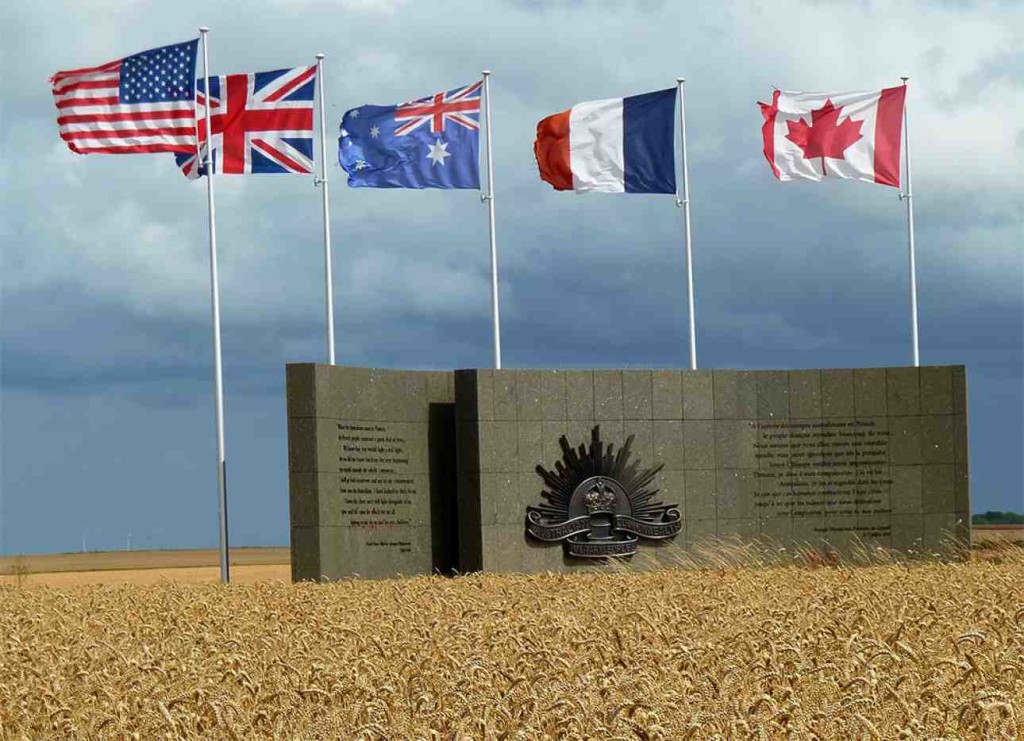 Unfortunately, Perry’s book also has a number of minor errors which pull the reader up short. Some have you reaching for a map, Beauvais becomes Beauvois, Morlancourt becomes Malancourt, while others suggest an author too busy making his case to worry about minor details. Monash lecturing at the Royal Military College, Duntroon, in 1901 (Duntroon didn’t open till 1911); Haig ‘running’ the BEF from August 1914 (December 1915); the King worrying about the ‘demise of the House of Windsor’ in 1916 (the name wasn’t adopted till July 1917 and the dynasty wasn’t under threat – that was the cousins in Berlin and Petrograd and even those demises were slightly later); the ‘British retreat from Mons, in south-east France’ (it’s in Belgium) or the 10th Regiment of the Light Horse entering Damascus, ‘a 30-kilometre, half-hour ride’, do undermine one’s confidence in the book’s reliability. Nightwatch was fortunate that the 10th didn’t have a runner in the Melbourne Cup that year.

This is a ripping yarn full of derring-do, conspiracies and plots involving Hughes, Bean, Murdoch and Lloyd George, with potted biographies thrown in for the Kaiser and Ludendorff, among others. It moves at a brisk pace and the persistent reader will reach the end ready to cry ‘Aussie, Aussie, Aussie’, but if you are looking for a balanced assessment of Monash and Chauvel – or, indeed, of Australia’s important contribution to the Allied victory in World War I – there are many much better books.

* Derek Abbott is a retired parliamentary officer. He has previously reviewed books for Honest History on Australian home defence in World War II, The Silk Roads, Victor Trumper, sport, Australian foreign policy, World War I at home, Duchene/Hargraves and the discovery of gold, Charles Todd of the Overland Telegraph, and other subjects.